When changing the zoom of a layer, its ProShow has both sides approach the layer center equally. Sometimes though, we’d like to hold one side stationary as the other side approaches. This creates an effect that effectively makes it appear as if the image is rotating on an axis so that one edge rotates toward you as the other rotates away. ProShow doesn’t do this automatically. You have to set it up to work that way. So, we do that by physically and continuously changing the location of the layer’s center as the layer’s zoom changes to 0%. When the layers zoom reaches 0%, the layer’s center is located at the same location as the layer’s edge. The first thing we have to do is to unlock the xy axes that will have one of them go to 0. You do that by locating the little “lock” symbol located to the immediate right of the Zoom-X and Zoom-Y settings. Next, set the one axis to zero without changing the other. Now, to keep one side stationary as the other side approaches, we need to know the pan value (the location on-screen) where the layer side is located. If this value is incorrect as the zoom moves to 0, the side that should remain stationary will move.

So, the question is, how to find that screen position in Proshow Producer. There are a number of easy and quick ways to do this. The method described below is one I’ve found to be both fast, easy, and one of the most flexible in terms of the variety of workflows it is useable with (particularly if you do not know how to figure it out mathematically).

What we’re going to do is to use the center marker of a temporary layer as our “ruler.” We will guide it to where we need it and read the pan value of its position to tell us the pan value of the layer’s edge we are going to hold stationary. So, we first add a new layer (gradient or solid). It can be any size you want. The default size I use is 1280×720. I change its opacity to 0% so I can see everything below it. All I need to see is its outline and the icon that identifies where the layer center is. So I need to make sure the Show Layer/Caption Controls is selected. If not, right click over a preview window and select it (it’s a toggled option).

One setting that may be active is the Show Motion Path. For the purpose of finding a layer’s edge, it should be turned off. The icons that identify the layer’s location at each a keyframe only interfere with seeing the layer’s center icon (it’s also known as the rotation center icon). Toggle it off by right clicking over the preview window and clicking on Show Motion Path. 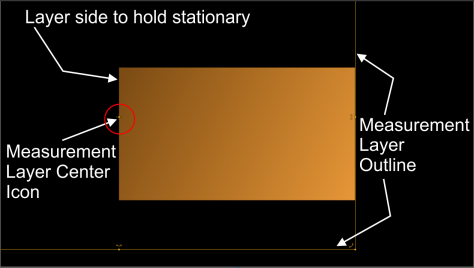 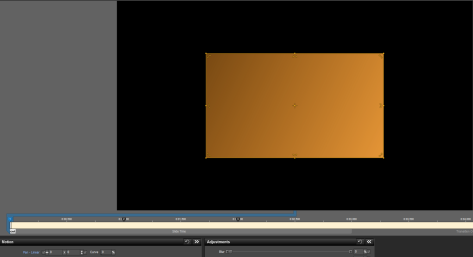 The layer is decreasing in size between keyframes 1 to 3. Here at keyframe 2, the layer has reduced its width by half while the right side has remained stationary. Note that keyframe 2s pan-x value is -12.5 here.

Too, if you already have a large number of layers, adding a new one can only add confusion. A duplicate layer goes to the top of the layer stack. You may not want it there and you’ll have to move it back down the stack until its where it belongs. Also, you could end up deleting the wrong layer when it comes time to removing the original layer! However, adding a solid or gradient layer can be made immediately above the layer of interest (thereby reducing the chances of confusing things for yourself!).

You could also use a “measuring” layer that has one axis reduced to 0.25% zoom while keeping the other at 100%. You end up with a line that you would then move around until it is aligned with the edge of the layer of interest. The pan location of that line would then be the pan value used on the layer of interest’s keyframe that has the zoom value of 0%. You just need to make the line’s color distinctive and easy to view (just change the color to a green, red, magenta or some similarly distinctive color when the layer is created). This is effectively the same as using the Measuring Layer above because you’re still using the layer center point to identify the edge of the layer of interest.